Fine acoustic pop, inspired by love, wanderlust and moving encounters. When they perform acoustically, they combine their soulful ballads with rousing uptempo numbers. Two creative minds with a longing for freedom, full of desire to travel and music in their hearts. 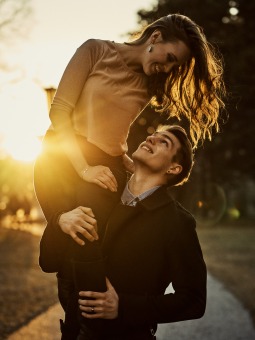 „A guy from a NGO organization stops you on the sidewalk:“ Stay for a minute, it’s about a sponsorship for children. „You go on, he follows you. At some point you agree to listen to him. If he just doesn’t stop talking … And somehow he is also very cute … Without signing any contract, you go on. Two days later, you run into each other again. This time he is traveling privately. He speaks to you again and invites you for a beer. From then on, everything is clear! What sounds like the plot of a love movie is the love story of Mira Long and Adam Kai. „Source article“ Mira & Adam a love like in Hollywood „: Woman.at

Already on the first date in Vienna, the two plan to travel together or to move to another country – of course, „just for fun“. Five months later, the bags were actually packed and the two moved into the apartment for interim rent in Hamburg. There was no money, but lots of love and the joy of life. Sometimes everything can be very simple, with the right person at your side.

One evening in the kitchen, with a glass of wine, Adam grabbed Miras guitar. For the first time in ten years, he struck the strings, and somehow the chords went off his hand surprisingly easily. Mira & Adam were born. Ad so their first songs where born, inspired by all these new impressions and experiences. Some were even written directly while busking, such as „Ain’t got money“, which is still an all time favourite and always in the setlist, since it just perfectly captured the mood of these days and is a totally “feel good song”. 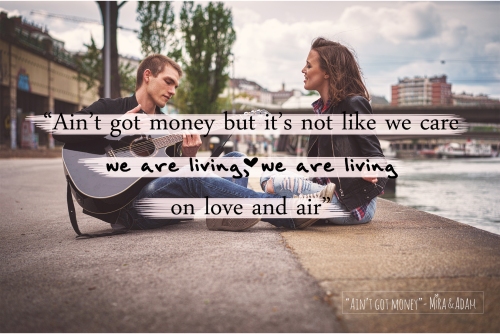 After Hamburg they went to Ireland, stayed with some friends, busking in Galway, just like Ed Sheeran once did. Smoke a cigarette on the Cliffs of Moher and drink a beer in an Irish pub. They didn’t not mind living out of their suitcases, on the contrary: somehow it just feels incredibly free to leave all belongings locked up in a warehouse. Home is not only a place, but also a feeling. And mostly what you associate with the dearest person. 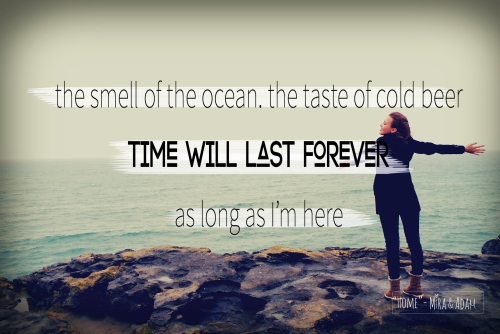 From Ireland they traveled by bus and boat to London. But right on the first night Adam had to fly to Berlin for a short time to do a model job and Mira stayed the night alone in the small, not so fine, hotel. You can imagine her sitting on the fire escape and staring into London at night, listening to the sirens and dreaming of Adam … So she did what songwriters do best, write a song about it..

„I’m in this messy little Hotel, in London by night. Wish i was with you on this flight. I wonder, if you miss me too and I wish, that I could be with you „

The small hotel was quickly swapped for a nicer Airbnb, because the planned week turned into a whole month. All they could then afford to eat was pasta with tomato sauce every day. But the artist’s heart is not looking for the 5-star kitchen, but for the adventure, the thrill, the freedom and above all the inspiration. Sometimes it is also adventurous to make an appointment with Mira, if her battery is constantly empty or the foreign credit is used up. If there is also the same coffee house ten times in a street, the planned coffee in Soho will not work and Adam will sit there alone … and write a song.

„Cold wind on rainy days, I’m waiting here, for desired rays.Coffee’s black, my cigarettes burning, it’s getting dark but I’m not returning, without you, without you…“

Back in Vienna, the music really started for Mira & Adam! Their joy of travel, packed in videos and songs, drew the first fans, the first organizers were attentive to them and they played the first gigs. After almost three years of band history, they can look back to about 60 gigs in Austria, Germany and the Netherlands.

Of course, between the performances, they continue to travel, small trips or a whole busking tour through europe, whatevers possible, the heart just longs for traveling. Meanwhile, Mira & Adams concerts feel a bit like a travel catalog. They take you to the beaches in Barcelona or the nightlife of Amsterdam. You always get inspiration for your own travels on their concerts … 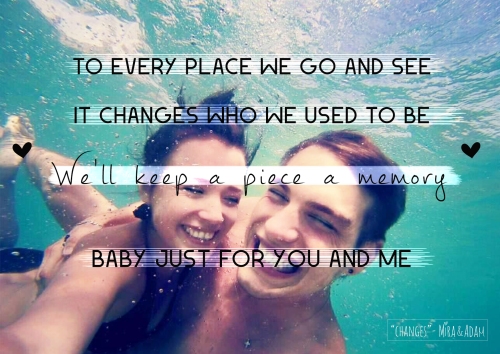 If you’re not traveling, chances are you’ll spend one or two evenings in front of your laptop looking at cat videos or other funny gadgets on the internet. Mira & Adam where especially amused about the videos of Phil Laude, in which he makes fun of the german grammar…Inspiration can come from the simplest things in songwriting – like the internet jargon. One evening (not quite sober) Mira & Adam decided to write a love song that should be very different from theirs: deliberately grammatically wrong and funny … Why? Why not.

Who knows the two privately knows, they like to have fun. The whole day they joke together and play jokes on each other. It was clear that this side while show up in their music someday. Life is not always serious and thoughtful. And in art you should set no limits anyway! So they both wrote and fiddled with a „love song from today“, recorded the result in a one-take, made a fun video and posted it on the internet the next morning.

Not only Mira & Adam found it funny: after 24 hours the track had 20,000 clicks. It quickly became 100,000 and they decided to publish it on Spotify and iTunes. For six weeks, the „Liebeslied vong heute“ took 2nd place on the Spotify „Viral 50“ Charts Germany and was also found later in this and other Spotify playlists.

By now, the song has been viewed more than 580.000  times on YouTube, streamed more than 1,6 Million times on Spotify, and clicked over two million times on Facebook. That did not miss also various record companies and the song was re-released under the label Guesstimate in a radio version. This can only go in one direction with Mira & Adam: up! Because when many people are happy about something, it can only be good, right?